Our remote is bespoke made for our product and is only available with the original apresShower®. It looks just like this…

Michael Godwin also brought a few variety of controls to his body dryer. On his APRESF model he used an airswitch inserted into the pod top to trigger the body dryers two speed functio 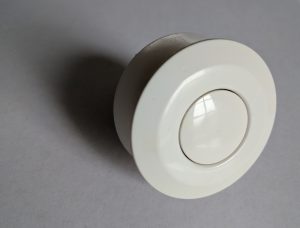 n. In a later model it was controlled by an early form or wireless control, nothing as fancy as Bluetooth though. The current remote is made of recyclable ABS with a large rubber diaphragm, pressing the diaphragm forces air through the connecting tube and triggers the airswitch at the rear base of the pod turning your body dryer on and off.  Michael included two speeds to his body dryer, one for use while showering to start the circulation of air and a second speed for drying apres shower!

When the body dryer is off press the remote firmly once for speed one, once on speed one a second press of the remote will switch it onto speed. A third and final press will turn the body dryer off. The remotes simplicity means it can be used easily and safely used within the wet environment of a wetroom or shower cubicle. You can fix the remote to the wall or leave it loose on the floor and operation of the remote can be made with hands, elbows, heels, toes shoulders or even a head making it very versatile for your use.

Need a replacement remote? You can find them in our shop